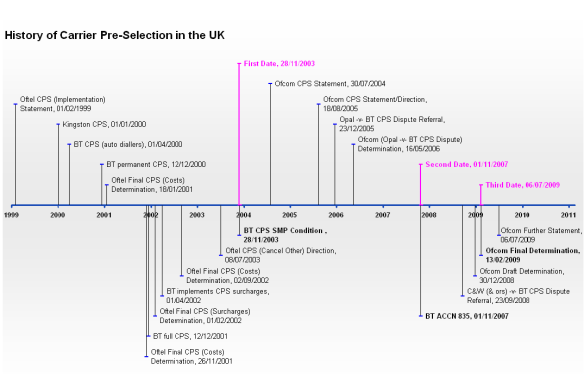 The history of Carrier Pre-Selection (“CPS”) in the UK (as depicted in the timeline above) may be considered to be a bit of a special interest.  However, the conclusions that may be drawn from Ofcom’s review of CPS set-up charges, following a long-running dispute between CPS operators and BT,  may be of wider interest.

BT became subject to a requirement to provide cost-orientated CPS under an SMP condition made under the new Communications Act 2003 regime on 28 November 2003 (the “First Date” labelled on the timeline).  Ofcom ruled in a Determination dated 13 February 2009 that BT had included the retail costs in dispute in breach of that SMP condition.  BT was ordered to reduce its CPS set-up charge by 78p to £1.69 per customer (a reduction of over 31%) from the date of the Determination (the “Third Date” labelled on the timeline).

However, in a Further Statement dated 6 July 2009 Ofcom decided not to order BT to make any repayment of the overcharges, even though in a draft determination included with the February 2007 Determination, it had proposed ordering BT to make repayments from the date when BT ought to have known that the retail costs were inappropriately being included in the CPS set-up charge, determined to be from the date that the current CPS charges were announced (1 November 2007, the “Second Date” labelled on the timeline).

This is a slightly troubling decision by Ofcom.  It appears to imply that there is no strict liability for breach of an SMP condition.  BT, in the absence of any guidance or ruling from Ofcom, was judged to have reasonably included the disputed retail costs in the CPS set-up charges.  Ofcom accepted BT’s subjective view of what was reasonable in November 2003 and November 2007.  Nowhere in the draft or final determinations is the aggregate amount of the CPS overcharges set out.  However, assuming that the overcharge was 78p for each of the 4,000,000 CPS customers in the UK, it can be estimated that the overcharge gave BT a benefit over 6 years in the order of £3m.  Whatever the actual benefit to BT, this must have been a relevant factor for Ofcom in determining whether their approach was appropriate and proportionate.  It is therefore surprising not to see any indication of the BT benefit in the Determination.

Ofcom avoided reviewing the impact of BT’s overcharging, the so called “competitive distortion”, without much justification.  Ofcom also avoided analysing the fact that BT, in recovering retail costs from CPS operators that they were not themselves able to recover, was arguably acting in a discriminatory manner in breach of a more general non-discrimination SMP condition.

It can therefore be argued that in getting away with overcharging CPS set-up costs since 2003, BT has well and truly stitched up the CPS operators.

It can also be argued that in:

with the result that BT was able to overcharge for CPS and not be required to repay any of these overcharges, Ofcom has screwed up.

If you would like a copy of the CPS Timeline, email us at critique@charlesrussell.co.ukand we will send you the Excel timeline by return.